Endocarditis (IE) is a life-threatening infection, which can lead to cardiac dysfunction, systemic embolism, and death. Most cases are due to Gram-positive and HACEK (Haemophilus Ocean, totals Ocean, Cardiobacterium hominisAnd the Eikenella eatsAnd the Kingela species) living organisms. Escherichia coliis a Gram-negative enterobacterium, a rare cause of endocarditis due to a lack of virulence factors that promote adhesion to endocardial structures. Here, we report the first case of IE complicated by pseudo-aneurysm of left ventricular paravalvular fungi caused by coli bacteria Post-catheter aortic valve replacement (TAVR).

An 88-year-old man underwent TAVR five years prior to this current insertion for aortic stenosis followed by transcutaneous pacemaker insertion three years later for symptomatic bradycardia. In addition, the patient had a history of transitional cell carcinoma (TCC) of the urinary bladder and had undergone a radical cystectomy using the ileal diversion 20 years prior.

The patient had a fever and general deterioration for a week. On admission, he was clinically stable with a high temperature (38.9 °C). Physical examination revealed no focal signs of infection or peripheral signs of IE. Urine and blood cultures were positive coli bacteriaTherefore, a preliminary diagnosis of UTI was suggested and antibiotic treatment with ceftriaxone was initiated based on the sensitivity findings. After 1 week of antibiotic treatment, significant clinical improvement was noted, serial blood cultures were obtained and autoclaved, and discharged home. Three days later, the patient returned with similar symptoms, including fever and general deterioration.

Laboratory results on readmission showed an elevated white blood cell count and C-reactive protein. Kidney function tests were normal. However, metabolic acidosis was observed. Urinalysis was positive for leukocytes, frequent growth of coli bacteria In urine and blood it was confirmed. Computerized tomography (CT) scans of the head, chest, and abdomen did not show an obvious source of infection and abdominal ultrasound was unremarkable.

During his second stay in the hospital, he developed transient loss of vision in his right eye. Magnetic resonance imaging of the brain (MRI) revealed acute stroke within the left posterior cerebral artery with other small infarcts that raised the suspicion of emboli strongly suggestive of a cardiac source (Fig. 1). Therefore, the patient underwent a two-dimensional echocardiogram (TTE), which revealed a right atrium echo block predictive of a right ventricle (Fig. 2 and videos 1And the 2). 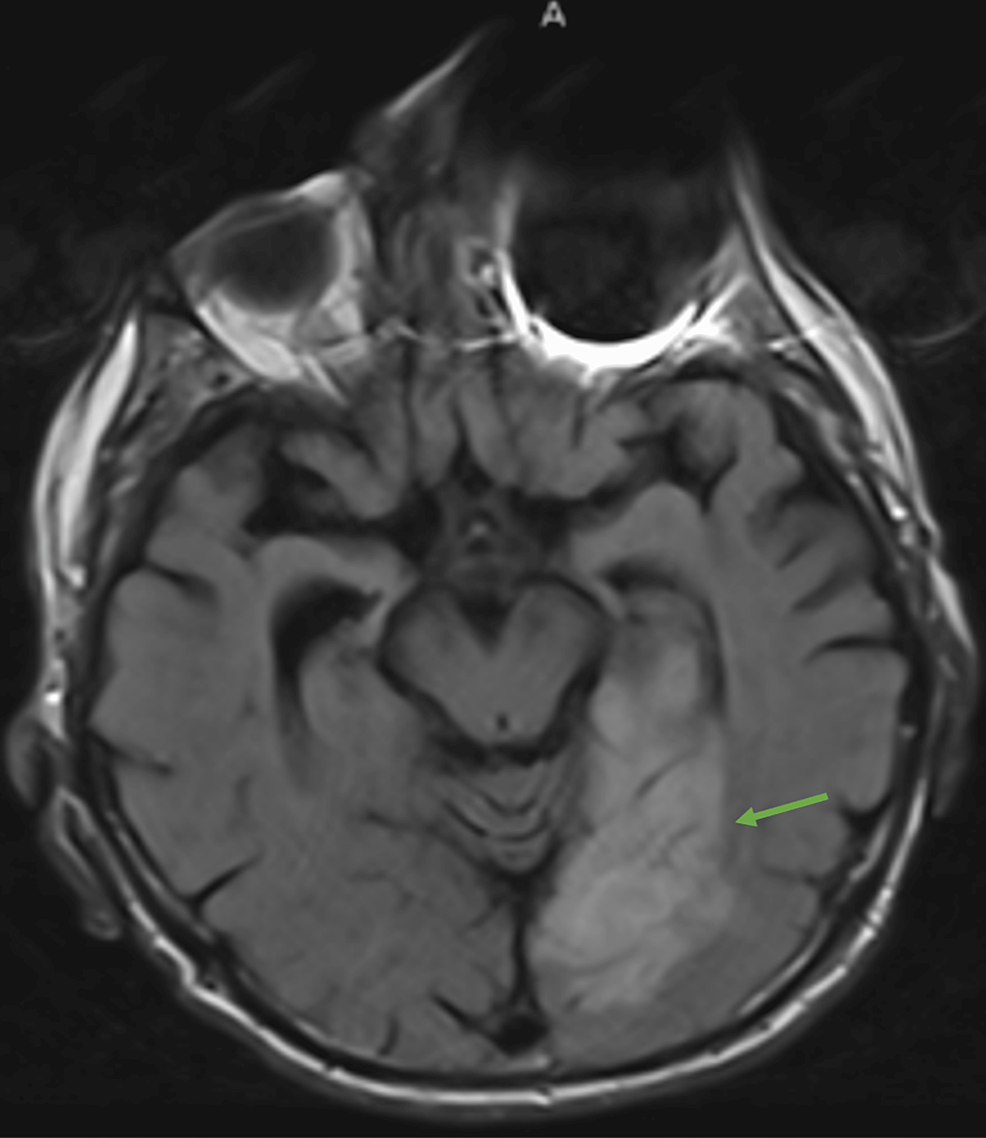 (a) Subcostal view showing a hyperechoic mass (blue arrow) protruding from the right atrium (RA) to the right ventricle (RV). Color Doppler imaging was negative for intra-cluster flow. (B) The mass measurement in two dimensions was 4.51 x 3.06 cm.

Four-chamber view showing a block in the right atrium.

Semi-coastal view showing an echo-generating mass in the right atrium predictive of the right ventricle.

Given this finding, a cardiac computed tomography was performed to show a posterior pseudo-aortic aneurysm, distended from the left ventricular outflow tract (LVOT) into the right atrioventricular groove (Fig. 3).

Fluorodeoxyglucose (FDG) positron emission tomography (FDG) showed high uptake of FDG around the aortic valve and within the pseudoaneurysm with no evidence of pacemaker sutures (Fig. 4). 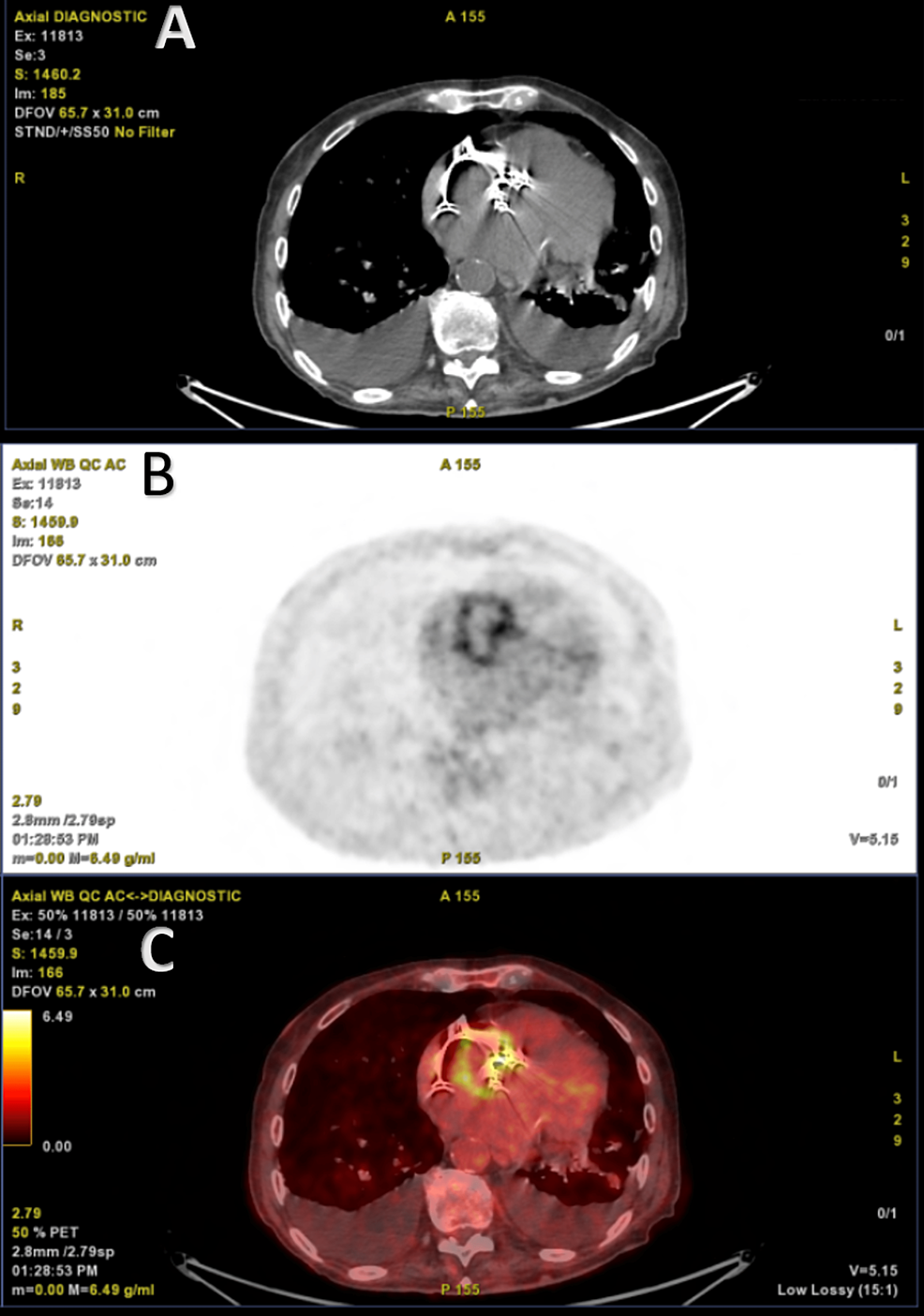 Computed tomography (A), FDG-PET (B), and combined PET/CT (C) shows. There was an increase in FDG uptake around the bioprosthetic aortic valve without the intervention of the pacemaker wires.

A multidisciplinary discussion, including cardiac surgeons, cardiologists, and infectious disease physicians, was conducted to discuss treatment options for a patient with left ventricular and infected pseudovascular left after transcatheter aortic valve resection. Due to its extremely high surgical risk, a decision was made to continue conservative treatment, including lifelong antibiotic therapy. The patient completed three months of intravenous ceftriaxone followed by oral ciprofloxacin according to bacterial susceptibility test results.

At a three-month follow-up, the patient had no signs of infection or hemodynamic compromise. However, seven months after IE was diagnosed, he was readmitted to hospital with fever, and blood and urine cultures showed positive again. coli bacteria Despite treatment with oral antibiotics. Unfortunately, resistance testing showed an extended-spectrum beta-lactamase (ESBL) profile with resistance to ciprofloxacin. Hence, it was treated with intravenous administration. TTE was performed and showed a decrease in cluster size. During his stay in the hospital, the patient developed Clostridium difficile Infection, and despite adequate treatment with antibiotics, his condition deteriorated and he died.

coli bacteria is Gram-negative enterobacteriaceae and is a rare cause of IE, accounting for less than 0.5% of cases [1]. In 2018, Akuzawa et al. [2] 32 cases of endocarditis caused by . have been reported coli bacteria. Since then, 16 reports coli bacteria IE added on original or synthetic valves. Common comorbidities related to IE include diabetes mellitus, history of malignancy, excessive alcohol consumption, kidney disease, and steroid therapy. coli bacteria IE has been shown to be more common in patients with prosthetic valves; The mitral valve was found to be the most affected followed by the aortic valve [2].

The incidence of TAVR-associated IE has been estimated to be 0.8-1.4% [5]. In a recent meta-analysis, no differences were found in the incidence of IE between surgical aortic valve replacement (SAVR) and TAVR. [6].

Data reported in the literature on the optimal management of coli bacteria IE, whether surgical or conservative, is rare. In a post-TAVR IE systematic review, Amat Santos et al. [7] reported that 60% of patients were medically treated, including those with complications associated with IE. The overall in-hospital mortality rate was 34% with no significant differences between surgical and conservative approaches. Cutaneous repair of complications associated with IE may be considered in some patients who are not candidates for surgery. Niños and others. [8] reported a case of successful repair of regenerated endocarditis of the mitral valve using the MitraClip device (Abbott, Abbott Park, Illinois), despite the presence of large motile plants. Mayer and others. [9] reported a case of successful vegetation removal in a high-risk patient using aspiration-based therapy. Finally, Chan et al. [10] Presented an alternative approach to the treatment of a loose vital mitral valve by transcatheter transcatheter mitral valve replacement with an embolus protection device, followed by long-term treatment with oral antibiotics. These reports provide promising therapeutic strategies for percutaneous repair of IE-related complications in high-risk, non-surgical candidates.

Gram-negative intestinal bacteria, in particular coli bacteria, is a rare cause of IE, which can be accompanied by serious complications, especially after cardiac interventions, such as TAVR. To our knowledge, we report the first case of post-TAVR IE complication due to innate left ventricular pseudoaneurysm caused by coli bacteria. In addition, we have highlighted the importance of multimodal imaging in patients with valves or artificial cardiac devices to promptly identify and treat IE and its associated complications. This condition should increase clinicians’ awareness of such conditions in high-risk patients.